The objective of this study is to develop a robot system that can clean external walls of buildings, which not only have a variety of forms, but also are made from various materials. Since cleaning faces of exterior walls has been done by people who support themselves against the rope, the workers’ safety and work efficiency always have been the big issue. Thus, diverse robots for cleaning external walls have been tried to be developed. However, utilizing the robots in the field always has some limits because it was impossible for them to be adhered to the walls made from various materials, and also to get obstacles out of the way.
To solve the problems our research is focusing on development of the new type climbing robot platform for exterior walls with innovative cleaning unit. 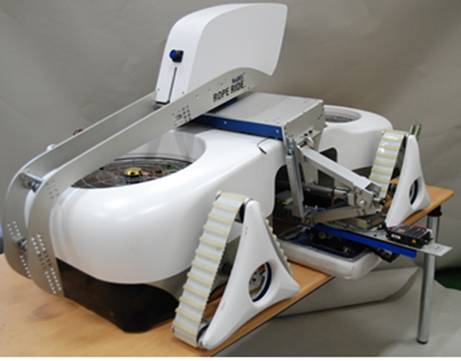 The robot platform driven on the rope installed walls by supporting itself against the rope is developed. This robot platform can move on the exterior walls made from various materials, such as, glass, concrete, marble, and aluminum panels, and also has a fascinating feature that the robot can get obstacles, which have deviation of less than 100mm on the walls, such as, windows frame, and stepped surface, out of the way. The size of robot platform is 1440×878×918(length×width×height), and its weight is 75kgf. In addition, it can climb the wall by the speed of 15m/min with maximum 20kgf’s payload.
The exterior wall cleaning unit loaded on the robot platform, possible to clean windows, is developed. The clean unit can clean 1.5m’s width of windows at a time with the speed of 200m2/hour by the rags with diatomite. The size of clean unit is 1500×300×400 (length×width×height), and its weight is 17kgf. The robot can move and clean windows with cleaning unit on the walls simultaneously even though the robot platform’s motion exists because the contact force between cleaning unit and wall surface is controlled to be sustained within the certain range by force feedback control algorithm.