Motion simulators are virtual reality systems that assume the appearance of a real situation by using audio-visual effects and movements of a motion base. Such devices are used for many purposes, e.g., flight and driving simulators. Most current simulators have adopted the Stewart-Gough platform as the motion base. This platform is a six degree-of-freedom parallel mechanism that has a limitation on rotational ability as 20~30 degrees, so it is not possible to realize a 360-degree platform overturn. The Eclipse-II mechanism was proposed to overcome this limitation . Eclipse-II mechanism simulates any continuous spinning over 360-degree in any rotational directions.In addition it is also able to simulate x, y, z-axis translational motions as well. Since there are no limits in the rotational motion, it is possible to design a more realistic and higher fidelity motion simulator.

The Eclipse-II is a six degree-of-freedom parallel mechanism that consists of three PPRS serial sub-chains that move independently on a fixed circular guide. Here, P, R, and S denote prismatic, revolute, and spherical joints, respectively. And it is verified through numerous robotic analysis including kinematic analysis, singularity analysis eliminating all singularities, workspace analysis, dynamics, path planning algorithm and so on. (Detailed in publications)

To verify Eclipse-II mechanism, we have developed a working sample of this mechanism, and tested full 6-D.O.F motions using various dynamic images and the 'MS Flight Simulator 2002'. Its specifications are shown in publications. 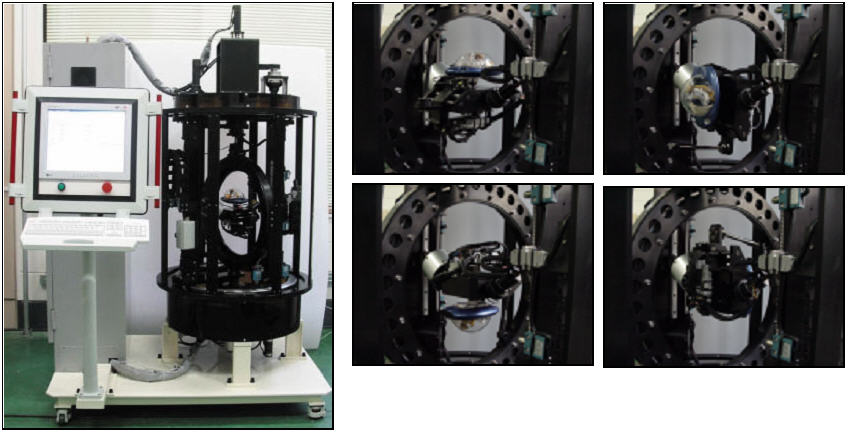 Fig.2 Working sample of the Eclipse-II

Based on the experience of the Eclipse-II working sample, we built an Eclipse-II one-man ride machine which is designed to let one person to ride and enjoy the virtual reality in Nov. 2005. To simulate any motion in the space, we are developing the on-line path planning algorithm, wash-out filters and so on. Moreover we are making several motion pathes synchronized to various dynamic images such as simulations of roller coasters, virtual reality amusement applications, space crafts, airplanes and jet fighters. Each sample movie clip is shown in the top of this page, in '1. Research Topic' catagory